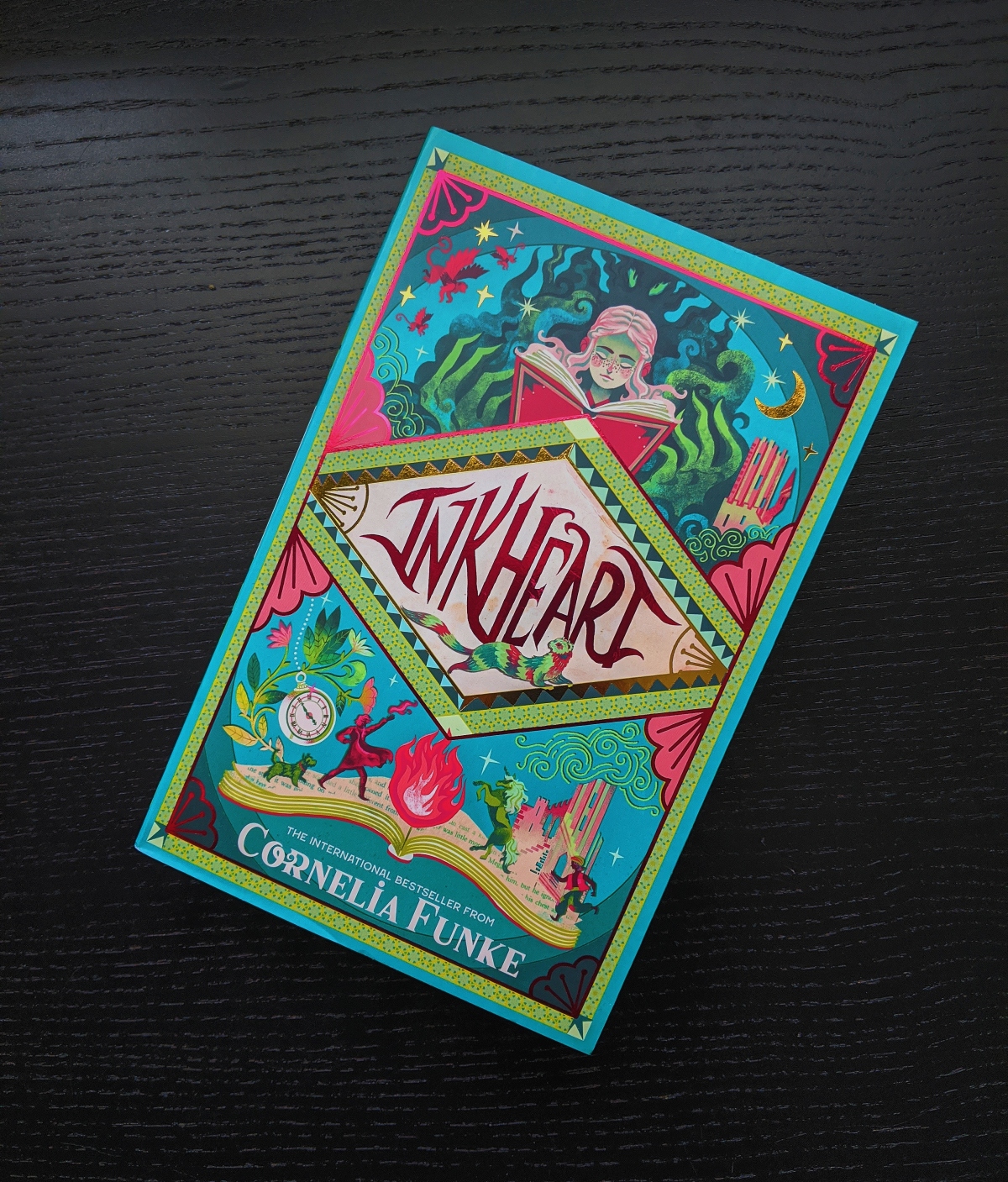 Twelve-year-old Meggie learns that her father, who repairs and binds books for a living, can “read” fictional characters to life when one of those characters abducts them and tries to force him into service.

Characters from books literally leap off the page in this engrossing fantasy. Meggie has had her father to herself since her mother went away when she was young. Mo taught her to read when she was five, and the two share a mutual love of books. He can “read” characters out of books. When she was three, he read aloud from a book called Inkheart and released characters into the real world. At the same time, Meggie’s mother disappeared into the story. This “story within a story” will delight not just fantasy fans, but all readers who like an exciting plot with larger-than-life characters.

“Books have to be heavy because the whole world’s inside them.”

This is a story about Meggie and her father Mo and his unique ability to read characters off of the written page. This is a re-read of a series I read when I was a young kid.

Growing up, I always dreamed of this and of entering a new and unique world. It was my dream to explore the worlds that I had read about in books. This one really explains the love I had for books when I was a kid. Meggie was someone that I related to when I was 12 years old, but not so much anymore.

This book was okay. It was definitely made for the younger end of YA, and it certainly read that way, which isn’t a bad thing, but it’s not a genre that I usually read, and since I’m a whole 13 years older than Meggie, I found her immature at times. Which is totally normal! She’s a kid, a 12 year old, and reacts in a way that any and every 12 year old would react given the situations that her father and her get into. I think this says a lot about her character and the author knowing the audience that she is intending to write for. Her father was also a really good dad. He cared for her and did everything he could to protect her.

Now, the villain… the big bad! Now I wish he was worse? He was supposed to be this big bad man who loved to revel in the pain of others, but… he never did? The worst thing he did was (slight spoiler) lock them away in a dungeon and PLAN to kill them. He didn’t do anything else. This could have been the limits that the author set due to the age of the readers, but it is one of the worst “tropes” for me. The ‘I’m so big and evil/ or big and strong, but I don’t do anything to show it.” In fact, one of the big villains henchmen was more evil and sinister than he was!

That being said, it seemed like this author really could not get to the point. This book could have been at least 200 pages shorter than it was. There were parts where it dragged too much for my liking. It took me longer than normal to read this book, and that could have been due to a lot being on my mind.

I know this sounds like I’m hating on the book, but overall I enjoyed it. Meggie and Mo really love books, and this is a story for readers of all ages. It had a big of a fairy tale kind of feel, and I think that the series can only get better from here.

I remember loving the second book in the series very much, so I decided to re-read the series and buy the new covers. Like I said, the first book was okay. I recognize that this was not written for my age range, and that I can’t judge it solely on that. I still plan on reading the next two books in the trilogy, because I’ve heard it gets significantly better. I’ll probably be reading the rest of the series over the course of the summer!

I’m going to put some more links to sign petitions and places to donate for Black Lives Matter below.

PETITIONS
Petition for George Floyd
Petition for Breonna Taylor
Petition for Tony McDade
Petition for Ahmuad Arbery
Petition to Stop the use of rubber bullets (Graphic Content Warning for the image associated with this petition.)
Defund the Police Petition
Life Sentence for Police Brutality
Hands Up Act
More Petitions

Thanks for reading, stay safe and healthy,